Garden gnomes have been on the roller-coaster of popularity since they first popped up in the shade of a backyard birdbath, it would seem.

Originally called der Gartenzwerg — good-luck charms used by the miners of Nuremberg — garden gnomes are said to have been introduced to England in the 1860s by Sir Charles Isham, an eccentric aristocrat and spiritualist, who brought a cluster of the ceramic gnomes from Germany to his Northamptonshire estate.

Yes, the Victorians really loved their garden gnomes… but then, what ornaments did the Victorians not appreciate? If a space wasn’t already decorated, they leapt to embellish and ornament it.

Back to garden statuary… The little pointy-hat creatures gradually fell out of favour over the following decades, for reasons unknown… But they experienced a revival in popularity in the 1930s and ’40s — perhaps, as the Great Depression gave way to the rumbles of war, there was a sentimental longing for the lucky Gartenzwerg of happier days? 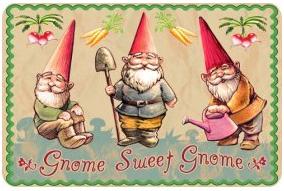 During the Second World War, however, garden gnomes dropped out of sight. At that time, many pleasure gardens were converted to Victory Gardens for vegetable production “for the war effort” — garden art would have been a low priority…

Gnomes popped up again during the 1960s, a decade with a single-minded focus on conspicuous consumption and leisure. But by then the charming ceramic gnomes of olden days were increasingly replaced by cheap modern plastic or concrete figures, crudely produced and without the charm of the vintage gnomes.

Not surprisingly, garden gnomes gradually came to join the Garden Kitsch list right next to the pink-plastic-flamingo and fat-lady-bending-over. In recent years, garden gnomes have been nearly impossible to find in most retail outlets – but that is gloriously changing as gnomes are creeping their way back into UK and European gardens, and from there back across the Atlantic to the trend-chasing United States gardeners ready to embrace a new twist on retro kitsch garden art..

Early  notice in the press of a British Garden Gnome Revival was reported back in 2006 by the Yorkshire Post magazine:

But now a light-hearted decision to stock them by [British superstore] Tesco has paid off as they have become their top-selling garden ornament since going on sale a month ago. Said Tesco gardening buyer Darren Atherton: “Like them or loathe them, gnomes are back and this year they could be making a reappearance in gardens all over Britain.

Organizers of the Royal Horticultural Society’s ultra-posh Chelsea Garden Show begged to differ, however. Gnomes have long been banned from Chelsea — they’re considered de trop and non-U, and not directly related to a garden, distracting the visitor’s attention from the plants and flowers…

The Royal Horticultural Society notwithstanding, I’ll go on record here and now as predicting that garden gnomes are in the full flush of a romping revival.  From empty shelves in garden centers, we’ve now got a variety of gnomish faces peeking out from under their pointy red hats all over the place, in a wide variety of costumes and poses. Look out for continuing creative innovation in gnome design, through the decade, as artists re-interpret the little red-hatted garden icon for the domestik landscape of the 21st century. Mark my words! Garden gnomes are  the Next Big Thing…

So, when the arbiters of taste from the Chelsea Show come to give me an award for my petunias (haha), tell them I’m busy — scoping out e-Bay for a deal on a vintage gnome who might like to spend his retirement in the Canadian countryside, alarming the neighbors and making ’em talk.